Want To Get An…

Home / Authors / Want To Get An Agent? Avoid This Rookie Mistake 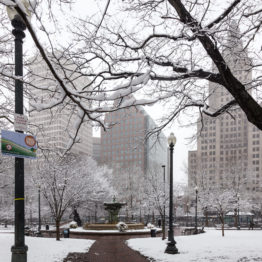 Want To Get An Agent? Avoid This Rookie Mistake

This is the first of our occasional “kiss of death” blog series, where we cover a writing mistake likely to get your proposal rejected by a literary agent and how to avoid it, with real examples.

Today’s blog is about “sweeping syndrome,” description with no viewpoint. This type of description looks at the scene as if from a camera mounted on a long crane.

The following example came across our desk recently (we’ve modified it only slightly):

Thick snow swirled down into the narrow, winding, cobbled street. A pale light glowed in the second-floor window of an apothecary shop. A young girl peered out anxiously, holding a candle up as if it would help her see. Far down the street, out of her view, a heavy wooden door creaked and rumbled open and three men in black cloaks emerged into the thick white maelstrom. They walked single file down the middle of the street, confident that no travelers would be out tonight. The men at the front and back were older men, stout, and walked with their hooded heads down. The man between them was a boy of seventeen, handsome, tall and slender. His eyes were bright with fear. The girl in the window blew out the candle. Down by the river, seagulls cried out as if in fear as a sailor threw a rope over the edge of a large ship down to the handler as the vessel edged into the pier. It awaited its cargo impassively. The three hooded men arrived. . . .

Now we revise this text in viewpoint writing, which forces us as writers to make some choices about characters and viewpoints, which we’ll talk about in subsequent blogs. The new version has five more words (181 vs 176).

Colin fastened the buckle of his father’s cloak and then his own. Grandfather pushed open the heavy wooden door which scraped against the cobblestones. Thick snow billowed into their home. Grandfather, already bent against the wind, turned back and shouted, “Hurry. Keep your heads down. We’ll walk in the middle of the street. It’ll be safe enough—no carts will be out tonight.”

Colin towered over Grandfather, who teetered, but respect dictated Colin walk second, with father third to protect the back. A bolt came to Colin as he realized he had never been so scared in seventeen years. Probably neither of them would return home that night. A lit window on up high on his left caught his eye. Barbara’s beautiful face, framed in her parents’ second-floor window, was stained with tears. He smiled up, but then quickly looked down. The light went dark. Father’s eyesight was sharp enough, but he had not noticed. Colin focused on his feet.

The gulls’ cries pierced the snow. They arrived at the pier as the boatman threw the rope to the dock man.

Sweeping Syndrome starves the reader. Don’t use it. Take advantage of the novelist’s toolkit and delight your readers by using viewpoint writing. Therein lies the novel’s strength.