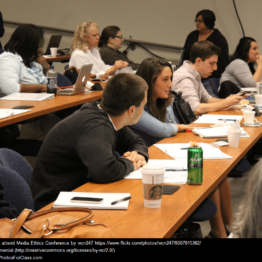 Here are some of the top conferences in the world divided into genres, because we’re helpful that way.

Thrillerfest – July 11-15 2017 – Get some insights from the likes of Lee Child, Val McDermid, Kathy Reichs, and Karin Slaughter.

Malice Domestic – April 28-30 2017 – visit this conference if you delight in traditional mysteries.

Sleuthfest – sponsored by the Florida chapter of the Mystery Writers of America, this conference is for mystery, suspense, and thriller writers. The 2017 event was in February, but you can sign up on the site for updates and get in first in coming years.

Bouchercon – October 12-15 2017 – self-described as the ‘passport to murder,’ crime writers will love this event in Toronto, Canada

Left Coast Crime – as with Sleuthfest, this event has passed, but check out the site for early information on next year’s conference for readers, authors, critics, publishers, librarians, and other fans of the crime genre.

Romance Writers of America – July 26-29 2017 – taking place in Orlando, Florida, this is not just an excuse to visit Walt Disney World. This conference will take ‘career-focused romance writers’ and help them make lasting bonds with other genre professionals to grow their careers.

SFWA Nebula Conference – May 18-21 2017 – This science fiction and fantasy conference will take place in Pittsburgh, Pennsylvania. Expect workshops and panels on expert knowledge, career management, and professional development. You can also attend the banquet and take part in the SFWA Nebula Awards ceremony.

British Fantasy Society’s Fantasycon – September 29 – October 1 – at this atmospheric event, you’ll have the first look at the winners of the yearly British Fantasy awards, as well as a lot of fun and networking opportunities with industry professionals.

World Fantasy Convention – November 2 -5 2017 – this conference has been running since 1975. A truly world-class event for writers and other industry professionals, this year you’ll be in the company of Tananarive Due and David Mitchell near the San Antonio River in Texas. Get in on the action for 2018 here.

StokerCon – April 27-30 – Get to The Queen Mary, Long Beach, California for the annual convention of the Horror Writers Association, which is the world’s premier organization for writers and publishers of dark fantasy and horror. This year, you’ll be able to meet George R R Martin, Chuck Wendig, Peter Crowther, Tananarive Due, and more. There is a ‘mini-academic conference’ taking place, as well as panels, presentations, classes, a film festival, and the chance to meet your favorite authors.

Westerns – June 21-24 2017 – this year will be the Western Writers of America’s 64th annual convention. Head to Kansas City, Missouri to talk shop with members, publishers, agents, and editors. There will be music, cowboy boots, and hats, too.

Whatever your genre, visiting a dedicated conference is a wonderful way to make connections, and deepen your appreciation of the genre. Learn something new and give something back by attending a conference in 2017.