The Arrival of Canada’s… 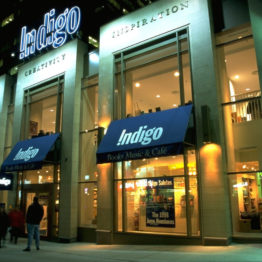 CEO Heather Reisman told investors that the company planned to open three to five stores over two years to explore the market response, starting small before committing to anything on a larger scale.

“The company will bring its unique assortment and life-enriching experience to test the largest retailing market in the world and strive to replicate its Canadian success,” Indigo said in a state-ment at the time.

The History of Indigo Bookstores

Indigo began as Coles in Toronto in 1940. In the 1950s, Coles and SmithBooks merged to form Chapters, which became the largest book retailer in Canada by 1995.

Indigo Books and Music, a separate company, opened in 1997 and grew to many more locations by 2001, when it merged with Chapters.

Why is Indigo Successful?

In an era when many booksellers are going out of business, especially in the brick and mortar realm, what is Indigo doing right?

The company created a digital e-reading division, Kobo, in 2009 and launched e-reading devices in 2010. This division was eventually purchased by Rakuten, providing Indigo with heavy cash flow.

Indigo also has focused on more than books, billing itself as a ‘cultural department store.’ At In-digo’s physical locations and online, shoppers will find everything from paper goods to home goods, toys, and fashion items. The online offerings are robust and come with speed and quality service, making the company a strong competitor to Canada’s amazon.ca.
Indigo will see competition from both online retailers in the US and existing bookstores. It may be able to differentiate as a lifestyle retailer rather than just a bookseller, which could help over-come this challenge.

For American book lovers and shoppers who enjoy the type of lifestyle Indigo is selling, it’s an exciting prospect. A new place to shop is always enticing. The introduction of a competitor to the bookselling landscape in the US may encourage existing American companies to step up their game and expand on offerings and services. We will certainly be watching how this unfolds.