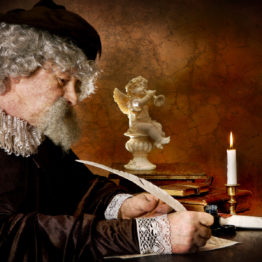 When asked for writing advice, authors and creative writing teachers often say, “Write what you know,” or “begin with ‘What if?’”

When you create a novel that features real historical figures, you’re blending both prompts.

Here are some top examples of this kind of novel.

“Lincoln in the Bardo“ by George Saunders

Longlisted for the Man Booker Prize, this novel has its roots in the death of President Lincoln’s eleven-year-old son Willie in 1862. This, however, is a novel that delves into the supernatural, with Willie entering a purgatory populated with ghosts, and where a struggle ensues for Willie’s soul.

This story concerns the assassination of John F. Kennedy. It features both JFK and Lee Harvey Oswald, but it is not about only about history. It is about the rewriting of history thanks to Jake Epping and his discovery of the means to travel through time.

Which historical character would make the best detective? How about Jane Austen?

Check out a world created by Stephanie Barron, in which Jane Austen solves a host of mysteries including “The Unpleasantness at Scargrave Manor,” “Man of the Cloth,” and “Ghosts of Netley.”

On her website she writes: “I was, I am convinced, channeling Jane … I sat down to write what she told me.”

If you want to use historical characters in your fiction, you can too. Jane Austen appears in many such stories. The Queen is also a popular choice and has had her share of reinvention too, with her life reimagined in works including Alan Bennett’s “The Uncommon Reader“ and “The Queen and I” by Sue Townsend.

If you’re concerned about being in trouble due to defamation of character and invasion of privacy, note that these apply to living people. If you are writing about historical figures, you should be okay.

That’s not to say that people won’t be upset by what you write. You’ll have to use your judgment regarding timing, your treatment of the character, and the sensitivity of living relatives.

Balance research with writing a compelling story from the heart. Choose an interesting historical figure who resonates with you, find an unusual angle, and you too can transport readers to a fascinating world of your invention.