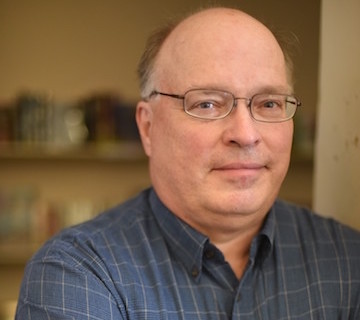 Steve Goble is a digital journalist who works for the USA Today Network in Ohio. He helps manage websites and social media for 11 USA Today Network news organizations. He previously wrote a weekly craft beer column called “Brewologist,” which appeared on these websites.

The Bloody Black Flag is his first novel. He is writing a second Spider John mystery, tentatively titled The Devil’s Wind, and working on a modern-day crime novel.

Goble lives in northern Ohio with his wife, Gere, their kid, Rowan, and a couple of moderately well-behaved dogs.

Praise for The Bloody Black Flag

“A page-turning, high-seas adventure filled with pirates, murder, and mystery. Goble’s debut is a thrilling, action-packed adventure featuring a piratical sleuth whose wits are as sharp as his blade.” — Susan Spann, author of the Hiro Hattori/Shinobi Mysteries

“A fast-paced mash-up of a rip-roaring pirate yarn mixed with a suspect-rich whodunit story. Gritty in detail, fanciful in conception, the novel is, above all else, a lot of fun. — Gordon McAlpine, author of Hammett Unwritten and the Edgar Award–nominated Woman with a Blue Pencil

“Steve Goble’s debut novel is a rollicking tale of murder and mayhem.  He tells a pirate tale like no one else has ever done before.  Unique, original, all told with the deft hand of an emerging master storyteller.  The best thing about this novel?  There will be more Spider John novels.  I can’t wait to go on another pirate adventure with this likable, but dangerous, crew.” —Larry D. Sweazy, multiple-award winning author of Where I Can See You