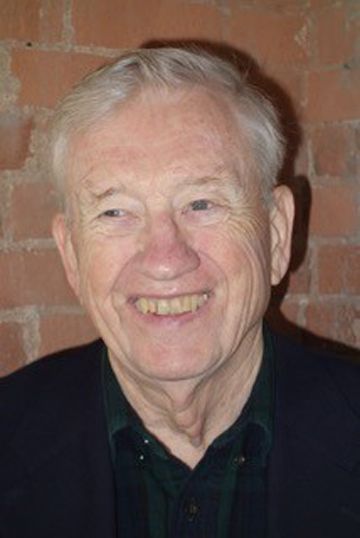 I was born in Oshkosh, Wisconsin, and raised in Green Bay, joined the army at 17 and served as a medical technician in Korea (1945-47). History has always fascinated me. It was my major at Notre Dame (B.A., 1951; M.A., 1952) and at Columbia U., NY (Ph.D., 1967). I have published a book (Ideas of Religious Toleration, 1969) and many scholarly articles on religious toleration during the Enlightenment in western Europe.

I live in Williamstown, Massachusetts, the site of Williams College, in the company of fellow academics and my church family.

My younger brother Michael was an historian and a prolific author of biographies (Vince, a life of Lombardi; Kennedy, a life of JFK; and other public figures). Elvy, my wife and partner in research and writing for 50 years, passed away in 2015.

I am a part-time Episcopal minister and have served congregations in western Massachusetts, eastern New York, southern Vermont, and western Illinois. Apart from the spiritual benefits, this work has helped stretch my writing beyond a scholarly audience to the general public.

In my professional career, I have taught European and American history at Notre Dame University, Ohio State University, Skidmore College, Wittenberg University, and finally for 22 years at Western Illinois University. Outside the classroom, I often taught adult learners. Among my more popular courses is “Crime and Police: a Modern History.”

In 1994, I embarked on a new career as a full-time historical mystery writer. I joined Mystery Writers of America and regularly attended the annual conference Bouchercon.

My first novel, Mute Witness (2001), began a series set in France and England on the eve of the Revolution. Publishers Weekly gave it a starred review and called it the best debut historical mystery of the year. Its chief protagonist is Anne Cartier, former vaudeville actress and tutor to deaf children. She teams up with Colonel Paul de Saint-Martin of the Royal Highway Patrol to investigate a wide variety of crime, high and low. The sequel, Black Gold (2002), features a black save and bare-knuckle black boxer. It was followed by Noble Blood (2004), set in the royal palace at Versailles. It also received a starred review from Publishers Weekly. Then came Lethal Beauty (2005) and Fatal Carnival (2006). Cruel Choices appeared in 2007 with a starred review in Kirkus, followed by Assassins’ Rage (2008), Deadly Quarrel (2009), and False Patriots (2010).

In 2013 I began a new series focused on America’s Gilded Age, the 1890s, with Death of a Robber Baron, set in the Berkshires, followed in the next year by Death in Saratoga Springs. In 2015 I published Death at Tammany Hall, set in New York City. At the present time (2021) I am in the final stages of Lethal Bargain, a look at a tragic affair in a Manhattan birthing clinic. The stories in this series revolve around a remarkable sleuth, Pamela Thompson, a composite of women who slowly and painfully emerged in the late nineteenth century.